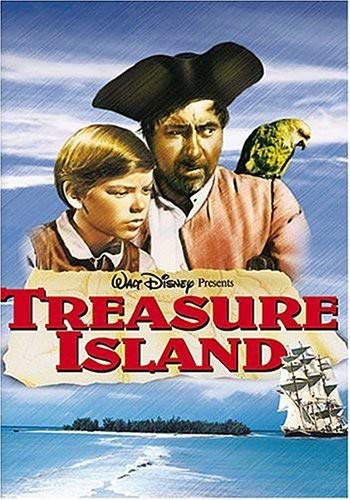 Ahoy, mateys! Come aboard the good ship Hispaniola and set sail in search of buried treasure in one of Disney’s most critically acclaimed adventure classics — presented in its original, uncut theatrical version! In his first all-live-action feature, Walt Disney has vividly brought to life Robert Louis Stevenson’s timeless tale of buccaneers and buried gold. Authentic locales, rich color photography, and musket-roaring action set the stage for the stouthearted heroics of young Jim Hawkins (Bobby Driscoll) — and the skullduggery of that wily, one-legged pirate of all pirates, Long John Silver. Aye, for the kind of excitement that only treasure and treachery can bring, there’s no better destination than TREASURE ISLAND!|The movie was filmed in England where Disney had “frozen” pounds following World War II — that is, film revenue that couldn’t be spent outside of England.|To create authenticity, the filmmakers used numerous “glass shots” in which an artificial background and extension were painted onto glass in front of the camera lens, creating amazingly realistic results.|Three camera crews worked on the film: one shooting out on the ocean, one shooting exteriors, and one shooting interiors in the studio.|Because young star Bobby Driscoll — the only American in the film — didn’t have an extended work permit, director Byron Haskin had to film all of his scenes first and complete the rest of the film without him.|Violence in the film — including a stabbing and two shootings — initially earned the 1950 release a PG rating. To earn a G rating, the scenes were cut out for the film’s 1975 re-release.