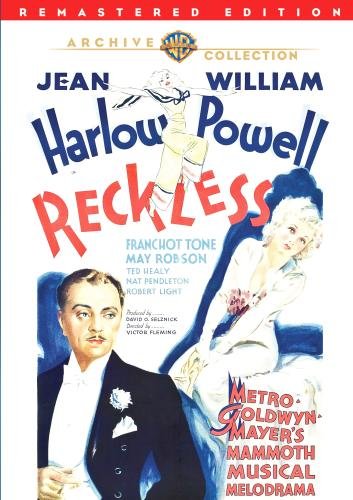 By 1935, every movie fan in the world knew Jean Harlow as both a blonde bombshell and a delightful comedienne. To expand her range, the studio gave her a dramatic role in Reckless – and Harlow was a hit. She plays musical star Mona Leslie, the bride of a champagne-stewed blueblood. When he blows his brains out, Mona is suspected of his murder, igniting media frenzy. The film is also notable for its Jerome Kern-Oscar Hammerstein title tune (Harlow, whose considerable skills didn’t extend beyond acting, was dubbed and body doubled in the musical numbers), plus a cast that includes Franchot Tone, Rosalind Russell, and as a hotshot promoter, William Powell, who would become the last love of Harlow’s tragically short life.