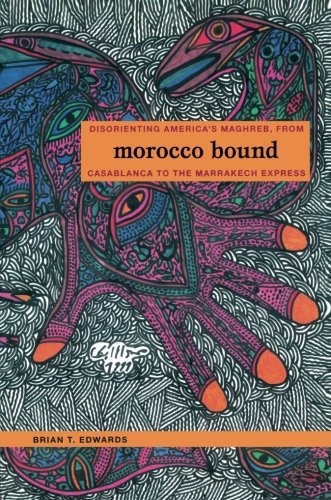 Until attention shifted to the Middle East in the early 1970s, Americans turned most often toward the Maghreb—Morocco, Algeria, Tunisia, and the Sahara—for their understanding of “the Arab.” In Morocco Bound, Brian T. Edwards examines American representations of the Maghreb during three pivotal decades—from 1942, when the United States entered the North African campaign of World War II, through 1973. He reveals how American film and literary, historical, journalistic, and anthropological accounts of the region imagined the role of the United States in a world it seemed to dominate at the same time that they displaced domestic social concerns—particularly about race relations—onto an “exotic” North Africa.

Edwards reads a broad range of texts to recuperate the disorienting possibilities for rethinking American empire. Examining work by William Burroughs, Jane Bowles, Ernie Pyle, A. J. Liebling, Jane Kramer, Alfred Hitchcock, Clifford Geertz, James Michener, Ornette Coleman, General George S. Patton, and others, he puts American texts in conversation with an archive of Maghrebi responses. Whether considering Warner Brothers’ marketing of the movie Casablanca in 1942, journalistic representations of Tangier as a city of excess and queerness, Paul Bowles’s collaboration with the Moroccan artist Mohammed Mrabet, the hippie communities in and around Marrakech in the 1960s and early 1970s, or the writings of young American anthropologists working nearby at the same time, Edwards illuminates the circulation of American texts, their relationship to Maghrebi history, and the ways they might be read so as to reimagine the role of American culture in the world.