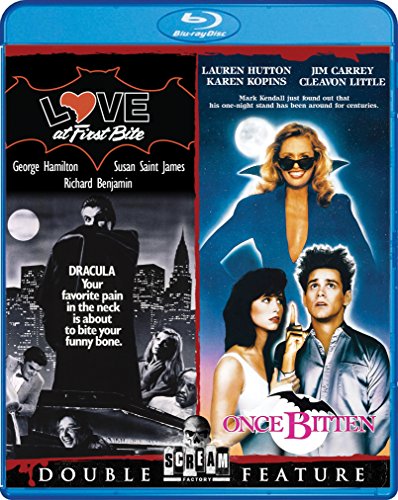 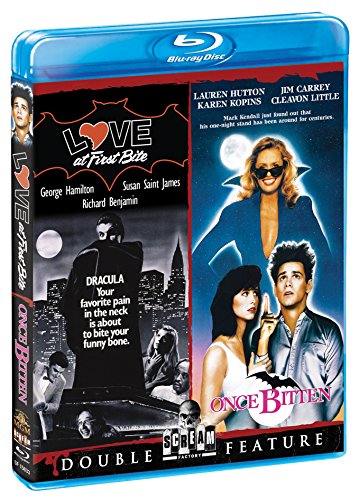 George Hamilton is possibly the tannest vampire in screen history in 1979’s Love at First Bite. When Count Dracula (Hamilton) is forced out of his castle to make room for an Olympic training facility, he relocates to New York City in search of discos, blood banks, and the fashion model who just might be the girl of his dreams. Will the Count take a bite out of the big apple: or will its mean streets take a bite out of him? Susan Saint James, Richard Benjamin, Arte Johnson, Dick Shawn and The Jeffersons’ Sherman Hemsley and Isabel Sanford also star in this outrageous romance about a guy who really loves the nightlife.

Jim Carrey is necking with a vampire in Once Bitten, a 1985 teen comedy also starring Lauren Hutton, Karen Kopins, and Cleavon Little (Blazing Saddles). When a vampire Countess (Hutton) seeks virgin blood, she soon discovers that it’s not as easy to come by as it was in the good old days! When she crosses paths with the still-virginal Mark Kendall (Carrey in one of his earliest screen roles), it ’s a race against time to get to him before he gets it on. Once Bitten is a totally 80s teen vampire flick where the bloodsuckers don’t sparkle, but the comedy most certainly does.