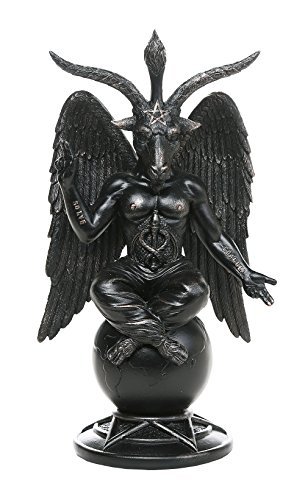 Baphomet is a term originally used to describe an idol or other deity which the Knights Templar were accused of worshiping, and subsequently incorporated into disparate occult and mystical traditions. It appeared as a term for a pagan idol in trial transcripts of the Inquisition of the Knights Templar in the early 14th century. The name first came into popular English usage in the 19th century, with debate and speculation on the reasons for the suppression of the Templars. Since 1856, the name Baphomet has been associated with a “Sabbatic Goat” image drawn by Eliphas Lévi, which contains binary elements representing the “sum total of the universe” (e.g. male and female, good and evil, etc.). However, Baphomet has been connected with Satanism as well, primarily due to the adoption of it as a symbol by the Church of Satan.