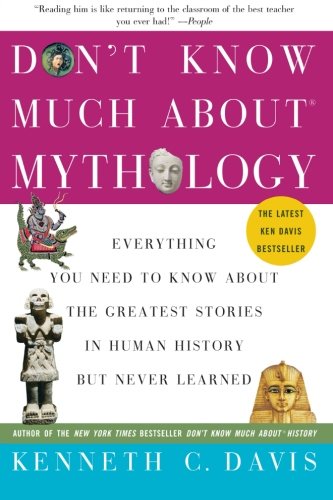 What is an Egyptian pyramid doing on the U. S. dollar bill?
Did a pharaoh inspire Moses to worship one God?
What’s a Canaanite demoness doing at a rock concert?

Since the beginning of time, people have been insatiably curious. They’ve asked questions about where we come from, why the stars shine and the seasons change, and what constitutes evil. The imaginative answers crafted by our ancestors have served as religion, science, philosophy, and popular literature. In this latest installment of the New York Times bestselling Don’t Know Much About® series, Kenneth C. Davis introduces and explains the great myths of the world using his engaging and delightfully irreverent question-and-answer style. He tackles the epic of Gilgamesh; Achilles and the Trojan War; Stonehenge and the Druids; Odin, Thor, and the entire Norse pantheon; Native American myths, and much more, including the dramatic life and times of the man who would be Buddha. From Mount Olympus to Machu Picchu, here is an insightful, lively look at the greatest stories ever told.