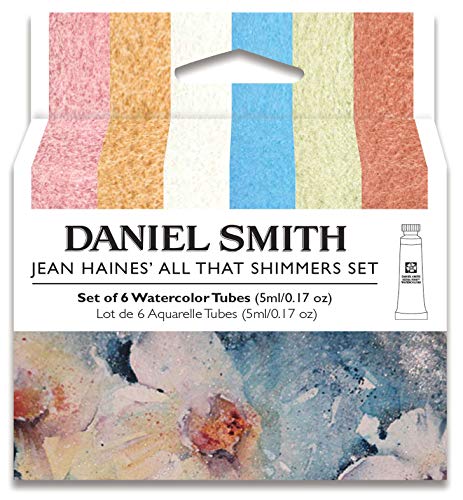 DANIEL SMITH is the Innovative Manufacturer of Beautiful Watercolors for Artists Worldwide, and makes the largest range of watercolors of any manufacturer, more than 250 colors. The 250+ color collection includes the exciting PrimaTek watercolors made from minerals (like Amethyst) plus other unique colors (like Moonglow) not available elsewhere, and Luminescent Watercolors which allow artists to capture the luminescent colors that exist in nature that regular watercolors cannot capture

Iridescent Ruby  is a sweet and soft metallic pink. Pearlescent White gives white paper a pearl-like luster. Use Pearlescent White as a slightly opaque shimmering glaze or combine with other colors to create lustrous pastel tones.   Iridescent Electric Blue is the color of sun striking the blue tones of peacock feathers, and is a vivid, luminous blue that captures the endless blue of skies. It is a wonderful mixer with other colors. Iridescent Topaz is a pale yellow-gold with just the slightest hint of a green undertone. Iridescent Copper is the bright and reflective color of a newly minted penny.

Learn what other customers say about this product  Read more