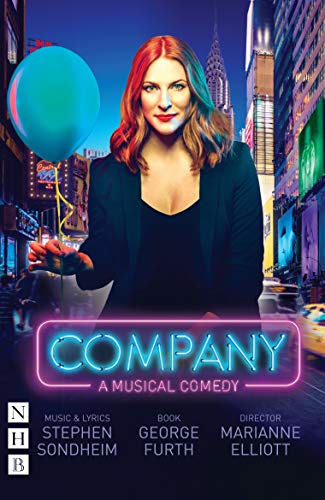 It’s Bobbie’s thirty-fifth birthday party, and all her friends are wondering why she isn’t married. Why can’t she find the right man, settle down and start a family?

A breakthrough on Broadway in 1970, Company is Stephen Sondheim and George Furth’s legendary musical comedy about life, love and loneliness, featuring some of Sondheim’s most iconic songs including ‘Company’, ‘You Could Drive a Person Crazy’, ‘The Ladies Who Lunch’, ‘Side by Side’ and ‘Being Alive’.

The acclaimed West End revival in 2018 was conceived and directed by award-winning director Marianne Elliott and produced by Elliott & Harper Productions. Reimagining the musical by switching the gender of several characters, including the protagonist Bobbie, played by Rosalie Craig, the production also starred Patti LuPone, Mel Giedroyc and Jonathan Bailey.

This edition features the complete revised book and lyrics for the production, colour production photographs, and an introduction by Sondheim’s biographer David Benedict.

Stephen Sondheim is the lyricist of West Side Story and Gypsy, and the composer/lyricist of A Little Night Music, Sweeney Todd, Into the Woods, Follies and Sunday in the Park with George, among others. George Furth is the author of The Act, The Supporting Cast, Twigs, Precious Sons and, with Sondheim, Merrily We Roll Along and Getting Away with Murder.