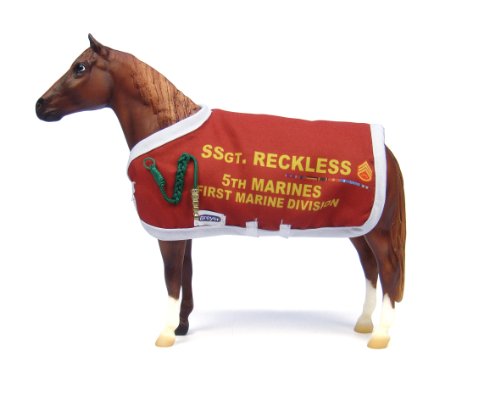 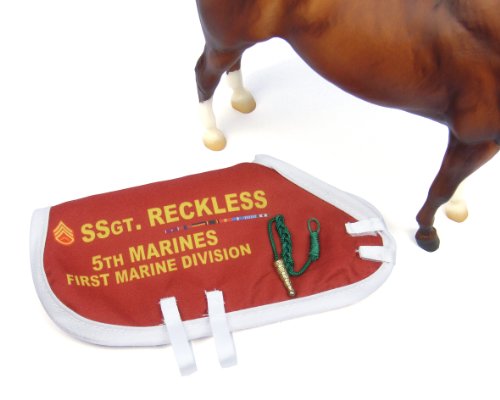 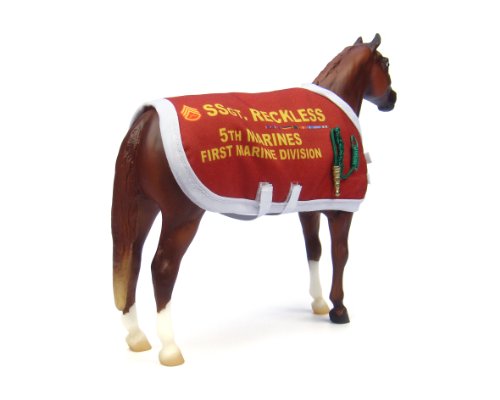 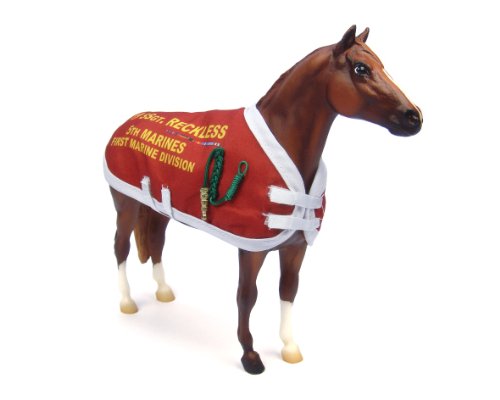 Sergeant reckless, a fascinating Mongolian mare that became a marine Sergeant. Named “reckless” By the Marines fighting in the Korean War, she began her military career as a simple pack horse. At the Battle of outpost Vegas in March 1953, reckless carried almost 5 tons of ammunition over the course of a few days through “no man’s land” To the front lines, and also carried wounded soldiers to safety. Brought back to USA, she received her final Promotion to staff Sergeant in 1959 At camp Pendleton, in addition to many other honors including 2 purple hearts. Reckless, who weighed pounds and stood 14 Hands high, became a national hero in 1954 when an article ran in the “Saturday evening post” Magazine about her heroics during several battles in the Korean War. Traditional sized model, 1: 9 scale. from the Manufacturer: Breyer is the maker of the world’s finest model horses! Since 1950, Breyer has brought a wide range of horse breeds from around the world to life for play and collecting – including real horse heroes like racehorse Secretariat, Olympian Valero, and reining superstar Big chef to Cash! The Traditional Series offers an unmatched level of realism and attention to detail that is appreciated by children and adults alike. Each 1: 9 scale model is meticulously hand-painted in rich colors, so no two are exactly the same. Breyer has an incredible community of model horse fans, artists, and collectors, and is proud to host Briefest: a three-day extravaganza for horse lovers and Breyer enthusiasts each July in Kentucky! Bring home a Breyer model, and let your imagination run free! Breyer Traditional Series: what started 69 years ago with a model horse created to decorate a clock has since become Breyer most iconic series, the one that revolutionized the Hobby and still dominates the market. Sculpted in every color and breed imaginable, with unmatched realism and breathtaking hand-painted detail, Breyer Traditional Series (1: 9 scale) is a longstanding favorite among children and adults the world over. Fans who play with these beloved models can build entire worlds around them with realistic accessories like barns, fencing, tack, trailers and even riders. about Breyer: the Breyer promise – the Breyer “promise” is the commitment we make to you, Our fans. With Breyer, you are getting a real horse of your very own. Whether a traditional best-seller or brand new product, every Breyer Horse is created by hand, under the watchful eye of the world’s leading equine experts. Our commitment to high quality material and hand crafting mean that just like in nature, No two Breyer models are exactly alike. Because nothing is as magical as having a horse of your very own. Quite simply, we want to help everyone discover how inspiring horses can be.